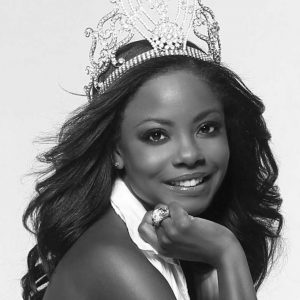 As a teen, Wendy Fitzwilliam modelled for clothing designer, Meiling. In 1996 she graduated from the University of West Indies with a degree in Law. She then went on to continue her studies at Hugh Wooding Law School. It was whilst she was in her final year of her studies that she won Miss Universe in 1998.  Having previously won Miss Trinidad and Tobago Universe that same year.

Fitzwilliam stated that she was an unlikely candidate for the beauty pageant as she was not a fan of beauty contests prior to entering. However, she was encouraged by Trinidadian Fashion Designer, Peter Elias to enter. She became the first contestant in history to win the swimsuit contest wearing a bikini. Fitzwilliam stated that she came to realise that beauty pageants offered opportunities to many girls that they may have not had before. Many former beauty queens are now successful businesswomen.

In June 1998, Fitzwilliam was honoured by the UN with the title of UNAIDS Goodwill Ambassador. This was for her commitment to fighting aids/HIV and the stereotypes associated with it. She has also narrated videos for both UNAIDS and UNICEF. She was also the UNFPA Face to Face Campaign Spokesperson. Fitzwilliam set up the Hibiscus Foundation on the 6th September 1998. The foundation worked to heighten AIDS awareness in Trinidad and Tobago. It was to also give assistance, financial and otherwise to children’s homes in Trinidad. Fitzwilliam aims to spread the Foundation to reach out to the entire West Indies. As well as all of the above, Wendy Fitzwilliam was appointed as the Red Cross Ambassador of Youth for the Caribbean. This was the first time that the Red Cross had appointed anyone to this high honorary office.
Having fulfilled her title as Miss Universe in May 1999, Wendy Fitzwilliam completed her legal education and was admitted to the Trinidad and Tobago Bar on 31st May 2000. She has also appeared on Caribbean’s Next Top Model as a judge, as well as on the Miss Universe Pageant, passing on her expertise. Fitzwilliam has also released a book titled ‘Letters to Ailan’ a book about her life, dedicated to her son, Ailan. There has also been rumours of her releasing two more books. One being a book about her travel experiences, having visited over 30 countries. The second about mothers from all walks of life and the bond between mother and son.  Wendy Fitzwilliam such a beautiful and caring soul, Caribbean1st absolutely salutes you.