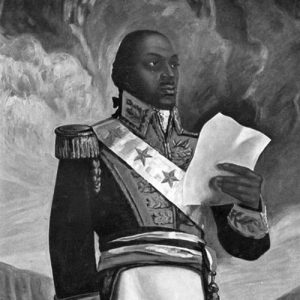 One of the greatest generals that has ever lived, Toussaint L’Ouverture is someone we most definitely had to honour. With varying accounts about his life and we are sure stories have changed over time, writing a completely accurate account may prove difficult, however one thing that we can say is that L’Ouverture’s fight for equal rights was instrumental in changing the course of Haiti’s future.

Born Francois Dominique Toussaint on the plantation of Bréda at Haut de Cap, in Saint Domingue (now Haiti). Some say he was born a freed man, however most say he was born a slave to a liberal master. As a result, he was allowed to teach himself how to read and write, Toussaint read every book he could get his hands on. He learned of Africa from his father. Toussaint knew he was more than a slave, he was a man with intelligence and dignity.

According to various accounts, Toussaint was freed from slavery shortly before the 1791 uprising in Saint Domingue, which had become a volatile colony. Inspired by the French revolution, citizens of Saint Domingue wanted the same opportunity to impact their independence from the French, more so plantation slaves wanted to be treated as equal. Toussaint was almost 50 when the uprising began, his first move was to help his mater escape the slaughter.  Following this Toussaint joined, Georges Biassou an early leader and general of the slave rebels and fought alongside the Spanish against the French forces. He served with Distinction in the Spanish colonial army. Toussaint took part in campaigns against the French in eastern Hispaniola. Before long Toussaint changed his name to Toussaint L’Ouverture meaning ‘opening’ in French.

By late 1793, the British occupied all of Haiti’s coastal cities and had allied themselves with the Spanish in the Eastern part of the island. As a result, Toussaint abandoned his Spanish allies and helped the French against the besieging British forces. Under pressure from the masses and largely due to the leadership of Toussaint L’Ouverture, France ended slavery in 1794. Following this, Toussaint L’Ouverture’s focus remained on restoring order in Saint Domingue.

By 1798, Toussaint along with generals Dessalines and Christopher recaptured several towns from the British and secured their complete withdrawal. His forces commanded all of French Saint Domingue aside from one state held by general André Rigaud. Toussaint L’Ouverture had become the most dominant figure within the colony. He overpowered successive leaders and proceeded to gain control of the entire island. Toussaint L’Ouverture began to reorganise the government and focused on public improvement. By 1801, the colony again knew a brief period of prosperity.

Napoleonic forces threatened to unravel the now relatively stable Saint Domingue. Napoleon’s forces and Toussaint clashed, leading to a peace talk and eventual treaty on 6th May 1802. Napoleonic General Leclerc betrayed the agreement and had Toussaint L’Ouverture captured and deported to France. The revolutionary leader, died of cold and starvation whilst imprisoned in the mountains of Eastern France on the 7th April 1803. The revolt in Haiti continued and the following year Haiti proclaimed its independence. A true Haitian patriot and martyr whose political instincts were on par with his military abilities. He was devoted to the cause of his people and not only an advocate but a leader in the fight for Haitian independence. Toussaint L’Ouverture, a self-educated slave with no military training able to lead his country to freedom, Caribbean1st absolutely salutes you.