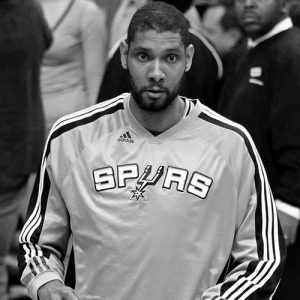 Tim Duncan was born in St. Croix and was interested in sport from an early age. His older sister was an Olympic swimmer and Tim Duncan had every intention to follow in her footsteps. Encouraged by his very supportive parents he began to embark on this dream of becoming a professional swimmer. However disaster struck and his dreams shattered when hurricane Hugo hit and destroyed this only swimming pool in his town in 1989.

Tim Duncan quit swimming and began playing basketball in his freshmen year of high school. By the time Duncan had reached college his true potential within the sport shone through. Tim Duncan was named an All-American in his Junior year and All-American and NCAA player of the year in his Senior year, 1996-1997. During his time at the University, Tim Duncan was able to achieve so much within his basketball career whilst obtaining his degree in Psychology.

This was just the beginning of what would be an extremely successful career. In 1997 Tim Duncan got drafted as an NBA player for the San Antonio Spurs, being the team’s first pick. He led the team to five championships. Tim Duncan went on to be the only player selected to both All-NBA and All-Defensive teams during each of his 13 seasons with the San Antonio Spurs. He was the 3rd player in league history to reach 1,000 wins with one team. Tim Duncan was also the only player in league history to start and win a title in 3 different decades. This is just to name only a few of his accolades.
Not only one of the greatest players in NBA history, Duncan is also an amazing human being. He believes in giving back to the community and is able to do so via his foundation, Tim Duncan Foundation. Having supported a number of local causes, Duncan realised he could give back even more via his foundation, which was set up on 21st December 2001. The foundation holds a number of charity events in order to donate funds to different non-profit organisations. For example in May 2008, Tim Duncan’s ‘Beat Cancer’ promotion was able to contribute $50,000 to a Cancer Therapy and Research Centre. His foundation aims to support development in education and youth sport and to encourage health awareness. Tim Duncan realised he could use his status to and power as a professional athlete to make a difference in the community.

Such an incredible person both on and off the court, Tim Duncan is an example of a true sporting icon. Tim Duncan has earned his place as one of the greatest players in NBA history through his consistent performance and determination. An incredible leader on the court and also a great role model for us all. Tim Duncan, Caribbean1st absolutely salutes you.