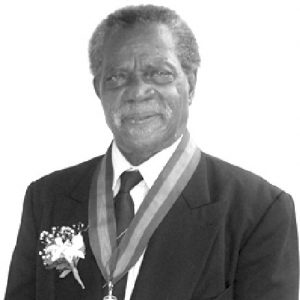 Born in Castries in 1927, Sir Dunstan Omer recognised his artistic talent whilst attending one of the local schools. After finishing school, Omer was offered a scholarship to study in Puerto Rico for a year. This was in order to for him to further develop his craft. On returning to St. Lucia, Sir Dunstan Omer became sub editor and then editor of the Voice Publishing Company Ltd from 1959-1962. He acted as the secretary to the St. Lucia Chamber of Commerce from 1967-1971.

Sir Dunstan Omer met Dereck Walcott at school. Derek Walcott later became a renowned poet and Nobel Laureate. Both men were taught to paint by Harold Simmons, a well-established artist. He encouraged them to see everything through their own eyes, from a St. Lucia perspective instead of the European perspective that they were used to.

Lessons learned from Harold Simmons shaped the direction of this incredible artist’s later work. He became very well known locally for his murals, which often featured in a number of Catholic Churches in St. Lucia. In 1973, he painted a mural behind the altar of the Roman Catholic Church in Roseau, St Lucia. The mural was over 800square feet but St Omer was able to complete it within a week. Sir Dunstan often paid homage to the Virgin Mary, who he usually painted cradling her son, Jesus. Controversially, at that time, Sir Dunstan St Omer always chose to paint religious figures as black figures. For example, the black Christ he painted at the Fond St Jaques church near Soufriere. His stated, ‘Your God must be of you and you of God’.

Sir Dunstan St Omer entered a competition to design the St. Lucian flag, when the island gained its independence in 1979. St Omer entered two designs but the least radical, milder design was chosen and is still the flag the island bears to this day. When designing the flag, Sir Dunstan St Omer thought of the island’s most iconic feature, the Pitons. These are represented by the triangles. He also wanted to illustrate the ethnic and cultural fusion between African and European influences. This is depicted by the white border on the apex of the black triangle. From an artistic point of view, this was also to create a contrast between the black triangle and the blue background.

Sir Dunstan St Omer didn’t only grace us with his works of art. He also passed on his knowledge by teaching art for over 30 years, from 1971-2002. He was credited for initiating a programme to incorporate the art of painting into the infant and primary level school curriculum.

He was known as St. Lucia’s leading artist and of course received international recognition for decades. St Omer was awarded the Papal Medal by the Catholic Church. He was honoured with the St Lucia Cross by the government on the island’s 25th anniversary. St Omer was named a National Cultural Hero by the Folk Research Centre in 2007. In 2009, he received an honorary Doctor of Letters degree from the University of the West Indies. A year later he received a knighthood from Queen Elizabeth II for his contribution to the arts of St Lucia, Caribbean and the world. He was also recognised as a St. Lucian icon that same year.

Father to 9 children, including Luigi and Julio who have followed in their father’s footsteps and are both well-known local artists. St Dunstan was also known as the father of prism style of painting. The UK Telegraph described him as the ‘Michelangelo of the Caribbean’. He was able to increase the national consciousness through his church murals. Sir Dunstan Omer, the most prolific religious artist in the Caribbean, may you rest in sweet paradise. Caribbean1st absolutely salutes you.