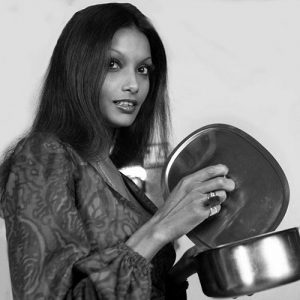 Born Shakira Baksh, to a Guyanese Muslim family, Shakira Caine had dreams of following in her mother’s footsteps and becoming a fashion designer. However, this was not the path destined for her. Whilst working as a secretary, Caine’s boss urged her to participate in the 1967, Miss Guyana contest. Through much persuasion, Shakira Caine entered the competition and was crowned Miss Guyana. Caine went on to compete at the Miss World contest in London aged 19, wearing beautiful evening gowns hand sewn by her mother, she placed 3rd.  That Miss World Pageant was the only one in any grand slam pageant in which 3 South American countries made it to the final, including the lady crowned Miss World, Madeline Hartog-Bel.

Following her success at the Miss World contest, Shakira Caine made a permanent move to England to work as a model and actress. Her acting debut came when she appeared in, ‘Carry on Again Doctor’. A British comedy film directed by Gerald Thomas, starring Kenneth Williams, Sid James and Charles History. Caine appeared in many film roles, including, ‘Tomorrow’, a comedy musical film starring Olivia Newton-John, written and directed by Val Guest. However, she is probably most well known for her acting roles in ‘The Son of Dracula’ (1974) and ‘The Hollywood Greats’ (1977).

Aside from her acting career, Shakira Caine, is noted for being the wife of the infamous actor Michael Caine. He spotted Shakira on a Maxwell House TV commercial produced by the then unknown Ridley Scott. For Michael Cain it is said to have been love at first sight. He was prepared to travel to Brazil (where the commercial was shot) to find the ‘most beautiful woman he had ever seen’. That wasn’t necessary because he soon realised that Shakira lived not far from him, in London. The couple married in 1973 and have enjoyed a long and fruitful marriage ever since. Shakira Caine appeared alongside her husband in John Huston’s ‘The Man Who Would Be King’, the film was nominated for 4 Academy Awards.

Shakira Caine decided to step back from the lime light to focus on her family. She has since gone back to her first love, fashion designing. Her interest in costume jewellery was sparked when she saw an exhibit of royal costumes of India, organised by the late Diana Vreeland, at the Met Museum in New York. Appealing to her roots and love of costume jewellery, Caine decided to design some necklaces and have them made. She took her pieces to Harrods, the collector loved them and wanted her to add more to her collection, to include earrings and bracelets. Shakira Caine, did just that, she also added shawls made in India and now her collection is sold in major department stores across the UK and USA. Caine’s creativity has also extended to painting, with some of her works having been auctioned for charity. Shakira Caine feels wonderfully accomplished to have achieved something on her own, the type of independence she was taught by her mother.

Shakira Caine, a wonderful strong woman. A natural Guyanese beauty, which before her success at Miss World, had gone understated. Caine, wasn’t what back then was associated with conventional beauty. She was the first girl from Guyana to be so successful at an International Beauty Pageant. She showed girls from Guyana, and people from around the world, that Beauty comes in all forms. Not just a beautiful woman, a clever woman too. Caine often frequented the local library in King St. She was an avid student of languages and initially dreamed of attending a good university abroad to study languages. Caine also enjoys reading Philosophy, again going against the Beauty Pageant stereotype. Shakira Caine gave confidence to many Guyanese women, they realised that Guyanese beauty is just as good as any. Shakira Caine, the ‘Guyanese Goddess’, Caribbean1st absolutely salutes you.