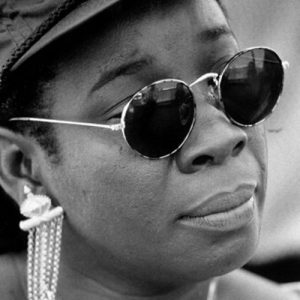 Rita Marley, famously known as Bob Marley’s widow, has had a fantastic musical career of her own. Rita was born in Santiago de Cuba, Cuba, but was brought up in Trenchtown, Jamaica. Rita loved to sing along to the radio and when it was discovered that she was an incredible singer, she was asked to audition for the Soulettes. Rita’s cousin, Constantine ‘Dream’ Walker and friend, Marlene ‘Precious’ Gifford were the other members of the group. The trio later sang for the Wailing Wailers, a group that consisted of Bob Marley, Peter McIntosh and Bunny Livingstone. Through working together Rita’s and Bob’s relationship flourished and they fell in love, and they married in 1966. The pair moved around between America and Jamaica recording and trying to improve their financial situation.

Rita recorded with the Soulettes throughout the mid-60s and also released a few solo hits including her single, ‘Pied Piper’. Rita helped form the group ‘I Three’ in 1974. The group consisted of herself, Marcia Griffiths and Judy Mowatt. They often sang with Bob Marley and the Wailers, as Peter McIntosh and Bunny Wailer had left the Wailers a year prior. I Three, Bob Marley and the Wailers first rose to international stardom in 1975 with the single ‘No Woman No Cry’, which was followed by the smash hit album ‘Rastaman Vibration’.

In 1976 while the Wailers rehearsed at the Marley family home, a group of armed men attacked the home. Rita shielded her children and a bullet grazed her head, Bob was hit in the sternum and arm. Thankfully everyone survived the attack, which was said to possibly be linked with political issues. The I Three continued to record and tour with Bob Marley for the rest of his career.

Bob Marley passed away on 11th May 1981. Rita has always and continues to preserve Bob’s music and memory through numerous events, including Bob Marley’s annual birthday celebration. Rita along with other members of the family set up the Bob Marley foundation. She also set up her own foundation, the Rita Marley foundation, in Jamaica and Ghana which works to eradicate poverty and hunger in developing countries. The foundation also works to promote education and religious harmony amongst much else.

In 1996 Rita was awarded the Order of Distinction by the Jamaican government, for her outstanding works and accomplishments. In fact Rita has a whole host of awards for her work in charity and music. She even received an honorary Ghanaian citizenship from the Ghanaian government, for humanitarianism and work in helping the poor and needy. As well as this Rita has continued to pursue her solo career, she released her album, ‘Sunshine After Rain’ in 2003 and ‘Play Play’ in 2004. She also continues to perform live. In 2005 she joined Marcia Griffiths and Judy Mowatt, who she sang with as the ‘I Threes’, to perform at Africa Unite. Which was a concert in Addis Ababa, Ethiopia, to honour the 60th anniversary of Bob Marley and also to give African intellectuals the opportunity to discuss and debate issues affecting Africans worldwide.

Rita Marley is a remarkable woman who has used her musical career to set up and support amazing organisations, in order to tackle poverty and hunger. She is also a loving mother, grandmother and great grandmother.  They say behind every successful man there is a great woman. Rita is that and more. Rita Marley, Caribbean1st absolutely salutes you.