the wonderful island of Puerto Rico 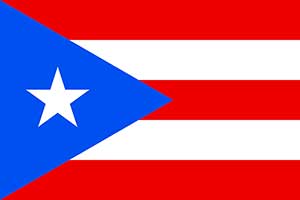 The current version of the coat of arms was officially re-adopted on 3rd June 1976. The major symbolism of the coat of arms relates to the dominance of Spain, the strong Roman Catholic influence in the region, and the integrity of Puerto Rico as a colony of Spain.

The green background represents the island’s vegetation. The Lamb of God and cross flag on the shield are symbols traditionally associated with St. John the Baptist, patron of the island. The book with the seven seals on which the lamb sits represents symbolism from the Book of Revelation.

The gold-crowned F and the arrows represent Ferdinand II of Aragon, while the Y and the yoke represent Ysabel, i.e., Isabella I of Castile who were the Catholic monarchs when Puerto Rico was discovered

The Latin motto, “JOANNES EST NOMEN EJUS” (a quotation from the Vulgate of Luke 1:63), means “John is his name”, referring to St. John the Baptist.

Island Motto “THE LAND, THE PEOPLE, THE LIGHT”, can be found at the bottom of the shield.’

The land of Borinquen
where I was born
is a flowery garden
of magical beauty.

A constantly clear sky
serves as its canopy.
And placid lullabies are sung
by the waves at its feet.

When at her beaches Columbus arrived;
full of awe he exclaimed:
“Oh! Oh! Oh!
This is the lovely land
that I seek.” 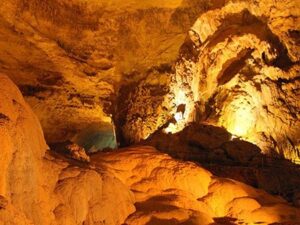 Located within the Rio Camuy Cave Park, this natural attraction is said to be one of the World’s largest cave networks. The. huge cave system covers 268 acres, and it is thought that there may be as many as 800 undiscovered caves there. Most people visit to take park in the cave tour. Visitors and nature lovers have the opportunity to be transported via a trolley to the cave. The caves feature various ‘rooms’ with extremely high ceiling, stalagmites and stalactites. Accompanied by an enthusiastic tour guide, visitors are taken through this wonderous attraction, visitors also have the aid of an audio guide. There is a river that runs through the caves as well as other magnificent sites, be sure to have your camera on hand. In a specific section of the cave there is said to be a colony of half a million bats, fortunately bats sleep during the day, so no need to worry about that! The tour is approximately 90 minutes long, and is operated on a first come, first serve basis. An interesting fact about the caves, is that they were used by the indigenous population long ago. 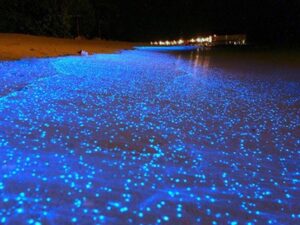 Mosquito Bay is a bioluminescent bay located on the island of Vieques which is off the east coast of the main island of Puerto Rico. There are only 5 bioluminescent bays in the world and three of them are in Puerto Rico. Mosquito Bay is the most popular and in 2008 it was declared the brightest recorded in the world by Guinness Book of World Records. We have to admit that most picture you will see of the bay are actually fabricated, this is because it almost impossible to capture the glow of the water. However, don’t be disheartened the water does actually glow. The glow is created by microorganisms called dinoflagellates. These organisms are present all through the ocean but are present in especially high concentrations in the bioluminescent bays. When disturbed, these micro-organisms briefly glow in a blue-green colour. Therefore, every splash and movement in the water causes the dinoflagellates to go. Of course, it is advisable to visit at night and to avoid going during a full moon to be able to see the microorganisms in all their glory. A truly indescribable experience that no amount of words or images could really do justice. 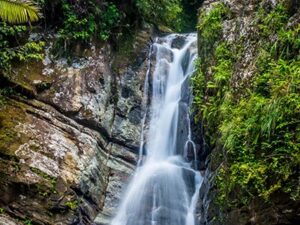 According to ancient Indian Legend, the good spirit ‘Yuquiyu’ (or ‘Yokahu’) reigned on his mighty mountain-top throne, protecting Puerto Rico and its people.

This tropical ‘Rain forest’ occupies very little area in Puerto Rico, only a single, crescent shaped, band on the windward side of the El Yunque mountains. It lies wholly within the El Yunque National Forest Reserve. The actual rainforest is at the top, you must drive to the top of the road and hike up to see the cloud or Dwarf forest. The Dwarf forest hosts a number of unique plant and animal species such as the endangered Puerto Rican Parrot (very rarely seen) and the tiny coquis (indigenous tree frogs) that serenade the evening hours. 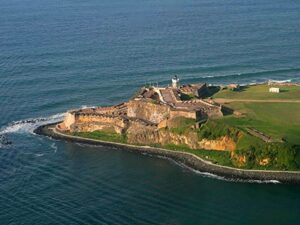 Formally known as Castillo San Felipe del Morro, this fort was constructed in the 16th Century to protect Puerto Rico. It successfully served its purpose, as Puerto Rico came under attack many times whilst it was under Spanish Rule. The massive six story fort is an extremely picturesque and intriguing attraction, it features underground prison cells and extensive tunnels. Fort El Morro has been tremendously well preserved; and attracts many visitors and locals alike. Visitors take the opportunity to learn about the history of the fort and its importance in protecting Puerto Rico. It’s beautiful green lawns attract many locals on a daily basis, who take advantage of the relaxing scenery and the perfect place to fly kites. 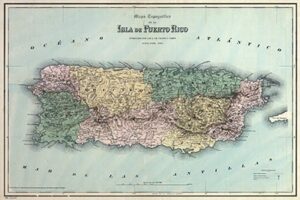 When Christopher Columbus sighted the island on 19th November 1493, the island was already inhabited by Taíno or Arawak Indians.  Columbus named the island San Juan Bautista, but due to the gold in the river the island was later named Puerto Rico meaning ‘rich port’, and the capital city took the name San Juan.  The Spanish began to colonise the island and used the natives on the island as slaves, as a result they were slowly wiped out due to being overworked in plantations.

Over the years numerous unsuccessful attempts were made by the French, Dutch, and English to conquer the island. In order to protect themselves against these attacks, the Spanish constructed many forts and ramparts which can still be found on the island. Puerto Rico remained an overseas province of Spain until the Spanish-American war when U.S. forces invaded the island, and in 1898, Under the Treaty of Paris, Spain ceded Puerto Rico to the U.S. Puerto Ricans received U.S. citizenship in 1917 and Puerto Rico officially became a U.S. Commonwealth in 1952.