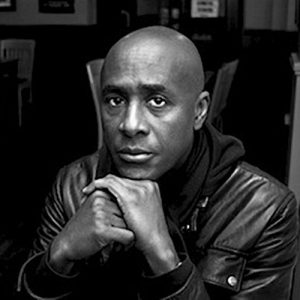 Pogus Caesar was born in St Kitts, but moved to Birmingham, England at a young age. He had an interest in art from he was young, sketching on anything that he could find at home. Drawing and painting provided a creative release for Caesar and he later took inspiration from Georges Seurat, a French pointillist. Seurat used dots to create magnificient pictures and this is something Caesar took to, using old fountain pens as he could not afford paintbrushes. Pogus Caesar sold his paintings in Birmingham’s Rag market and within a few years he was exhibiting in major galleries, such as Leicester Museum and Art gallery and the Mappin Art gallery Sheffield. A major highlight in Caesar’s career was when he presented one of his pieces, ‘A New Approach’ to Princes Diana. In the 1980s he became the director of the West Midlands Arts Services. He was also the first Chairman of the Birmingham International Film and Television Festival.
Pogus Caesar eventually moved in photography and enjoyed taking photographs of his local community including prominent figures and historical events. Caesar took some highly sort after photographs of the Handsworth riots in 1985. Pogus Caesar was able to capture images that the media could not. He was able to get close up shots of the brief period of unrest as he was a known and trusted member of the black community. Rioters trusted that he would not use the images to portray a negative or distorted view of the riots, which was what the media was likely to do. Newspapers tried to buy the images from Caesar, but he refused, knowing that they would have to sensationalise the images in order to create a story. In fact Caesar destroyed many of the negatives and did not show some of the images until almost twenty years later. Caesar travelled the world taking photographs of diverse communities in places such as India, Africa, America and Albania. His first touring exhibition was in New York in 1986 called ‘Instamatic Views of New York’.
Caesar produced and directed television programmes often with a multicultural focus. He started his own film, televeision and radio production company in 1993. Caesar worked with many famous faces such as Lennox Lewis, Jada Pinkett Smith, Stevie Wonder and Prince, just to name a few. In 2002 Caesar directed his first film drama, ‘Forward Ever – Backward Never’, a tragic love story set against the backdrop of oppression in Cuba in the 19th Century. He was awarded the Westmore Ezekiel Award for his contribution to British TV.

It is clear to see that Caesar enjoyed and indeed focused on capturing the heartbeat of the Caribbean community in the UK and around the world. Caesar is a very talented man who has directed films, written books as well as created magnificent works of art. He captured photographs of artists and entertainers in unguarded moments which added a special touch to his work. Pogus Caesar still feels that he is learning his craft with every shot he takes, and it is the learning element of his career that he enjoys and takes pride in. Pogus Caesar you continue to do amazing work, Caribbean1st absolutely salutes you.