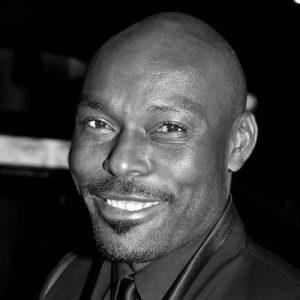 Jimmy Jean Louis was born in Petion-Ville, a remote village in Haiti. He and his family moved to Paris when he was 12. The move was quite difficult to get used to at first, going from a rural city, with no water or electricity to a fast-paced city lifestyle. His parents moved back to Haiti, but Louis and his brother remained in Paris. A very resilient man, Louis was able to gain his Degree in Business, without a permanent home, the night clubs of Paris kept him off the streets. As Louis got older he began to move around Europe. He worked in musical theatre in Spain, where he spent 3 years with ‘La Belle Epoque’ theatre group. Louis later moved to Italy where he became a model. He enjoyed a very successful international modelling career. Modelling for Valentino and Gianfranco Ferre, his career took him to London, Paris, Milan, South Africa and New York. Jimmy Jean Louis appeared in quite a few music videos in the mid 90s, including that of, George Michael, Seal and Mariah Carey.

In 1998, Louis moved to Los Angeles to pursue his acting career. He appeared in underground and independent films, before landing a role in Jean Claude Van Damme’s ‘Derailed’. This opportunity set the stage for subsequent roles with other Hollywood A-listers. He appeared in films such as ‘Tears of the Sun’ alongside Bruce Willis and Monica Belluci, ‘Hollywood Homicide’ with Harrison Forde and Josh Hartnet and ‘Monster-In-Law’ alongside Jane Fonda and Jenifer Lopez, just to name a few. 2006 proved to be a very fruitful year for Jimmy Jean Louis, he landed lead roles in ‘The Diary of a Tired Black Man’ and ‘Phat Girlz’, starring opposite Oscar winner, Monique Imes Jackson as her love interest. That same year, Louis played the role of ‘The Haitian’, a Haitian superhero in the TV show ‘Heroes’. This was a character he was extremely proud to play as he believed it portrayed Haitians in a very positive light on one of the most successful shows on TV. One of the biggest highlights of Louis’ career so far, was the opportunity to play the role of Toussaint L‘Ouverture, in the biopic of the revolutionary Haitian leader. The film was shot in French with a little Kreyol and was filmed in France and Martinique.

Louis’ acting career took him all over the world including France, England, Indonesia, Ghana and Nigeria. All made easier by the fact that Louis can speak 5 different languages, English, French, Spanish, Italian and Creole. He also appeared in 4 Haitian movies. Jimmy Jean Louis received the best actor nomination for the movie ‘Sinking Sand’. He also received an AMAA in 2011, the equivalent of an Oscars for Nollywood movies.

With all his success, Jimmy Jean Louis, has never forgotten where he has come from. In fact, he uses his success to give back to the Haitian community. Louis founded the organisation, ‘Holly wood Unites’ in 2008 as a means of helping the people of his beloved native land, Haiti. It is a non-profit organisation; whose mission is to promote sports and cultural activities for the underprivileged youth of Haiti. They focus on sports and culture to brighten the hearts and minds of the children. It encourages them to build confidence, competence and gives them a sense of community. As well as this, they learn invaluable life skills and citizenship. The organisation creates arts and sports programmes in areas where there aren’t any. They provide existing grassroots organisations with equipment, supplies and funds to help them accomplish their goals.

A catastrophic earthquake hit Haiti in 2010, bringing much devastation and loss of life. The house in which Jimmy Jean Louis grew up in was destroyed and many of his relatives were killed. The earthquake also destroyed a school, which left over 100 students without a place to learn. The Hollywood Unites organisation, have since rebuilt the school in Cadet, a very remote part of the country, where 90% of the people don’t know how to read and write. Evidently, the need to rebuild the school was great, the school not only provides children with an education but also with one meal a day.

As well as establishing this incredible organisation, Jimmy Jean Louis, recognises the unique opportunity that Hollywood has in raising awareness about Haiti. He has brought various entertainment and political celebrities to Haiti with him, to show them the beauty of the country but also to highlight the tremendous challenges the country and the people face. Louis has never forgotten that he was once a young boy facing the same challenges that many children of the country still face. Louis, hopes to use his influence to improve the lives of everyday Haitians and to bring their everyday plight to the world’s attention. It has to be said that Haitians never lose their character in the face of adversity, they are an extremely resilient nation, with a strong sense of community. Jimmy Jean Louis takes little for granted and has never lost his connection and empathy for the daily struggles of his nation. As a lifelong sportsmen and semi-professional football player, Louis has always believed that sport is a means of helping the impoverished children of Haiti, teaching them to rise above their circumstances and become role models for their communities. Jimmy Jean Louis arranges for monetary and equipment donations from his football club, ‘Hollywood United’, to be sent to Haiti and distributed by local clubs.

Jimmy Jean Louis, has a beautiful family of his own. All of his children were born and live with him in America, however he has ensured that they are aware of their Haitian heritage. They travel to Haiti frequently and he speaks the language to them at home. Jimmy Jean Louis, one of the most prominent black actors in Hollywood and arguably the most successful Haitian actor in Hollywood, Caribbean1st absolutely salutes you.