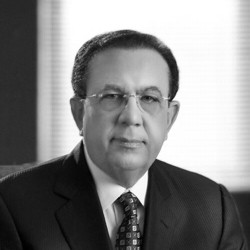 Héctor Valdez is the current Governor of the Central Bank of the Dominican Republic, a position which he held from the 31st August 1994 to the 16th August 2000 and was reappointed on 17th August 2004. Valdez gained his Bachelor’s Degree in Economics in 1971 from the Autonomous University of Santo Domingo. He furthered his studies and began his career at the Central Bank of the Dominican Republic. He began as a Technical Assistant in the Economic Research Department in the early 70s and by 1984 he was the Director of the Department, he held this position for 2 years. Valdez held various positions within the bank following this. Héctor Valdez then became the General Manager of the Banco De Reservas, a state owned commercial bank from 1993-1994.  He left this position to become the Governor of the Central Bank, a position, as mentioned before, he still holds to this day.
Alongside his financial career, Héctor Valdez took on many other ventures and positions of responsibility. For example, he was the Professor at Universidad Central del Este from 1975-1977. And then a professor at the Institute of Higher Education from 1978-1989.

Héctor Valdez is a well-known economist and author of numerous works relating to economics. He has also won a whole host of awards for his many years of service towards the enhancement and development of not only the economy in the Dominican Republic, but Latin America in general. Some of these include: Public Servant Medal of Merit in 1996, Economist of the Year in 1997, Banker of the Year in 1998, Boss of the Year by the Dominican Association of Secretaries in 1999, Governor of the Year in 2006 for the Region of the Americas and Medal of the Order of Merit of Duarte, Sanchez and Melia in the rank of Officer in 2012. He is also listed among 500 personalities of the Financial World by Who’s Who United States.

The list of accolades Valdez has collected and positions he has held in his time is extensive, a quick research into him will show you this. Héctor Valdez held the position of President of the Central American Monetary Council (CAMC) in 2011. He is a leading member of the Dominican Association of Economists and holds the rank of Cabinet Minister, granted to him by the President at the time, Leonel Fernández. Héctor Valdez has been and continues to be committed to the recuperation of the Dominican Republic economy and the development of his country. Héctor Valdez, an untiring advocate of economic reform, Caribbean1st absolutely salutes you.