“One People, One Nation, One Destiny” 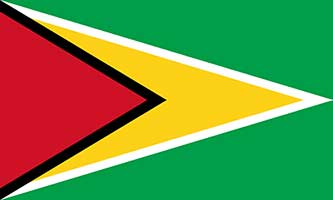 The Golden Arrowhead, Guyana’s National Flag has FIVE symbolic colours — GREEN represents the agricultural and forested nature of Guyana, WHITE symbolizes the rivers and water potential of the country, a GOLDEN arrow represents Guyana’s mineral wealth, BLACK portrays the endurance that will sustain the forward thrust of the Guyanese people and RED represents the zeal and dynamic nature of nation-building which lies before the young and independent Guyana. 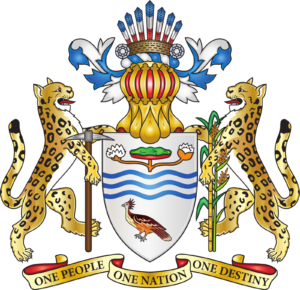 The coat of arms of Guyana was granted by the College of Arms on 25 February 1966.

It includes a crest of an Amerindian head-dress symbolising the indigenous people of the country, this crest is also called the Cacique’s Crown. The two diamonds at the sides of the head-dress represent the mining industry. There is a helmet (monarchial insignia) just below the headdress. Two jaguars act as supporters holding a pick axe, sugar cane, and a stalk of rice, symbolizing Guyana’s mining, sugar and rice industries. The coat of arms also has a shield decorated with the Victoria amazonica lily, Guyana’s national flower. The three blue wavy lines represent the three main rivers of Guyana with the national bird, the Canje Pheasant, found just underneath. The national motto, “One people, One Nation, One Destiny”, appears on the scroll below the shield.

Dear Land of Guyana, of rivers and plains Made rich by sunshine, and lush by the rains, Set gem?like and fair between mountains and sea Your children salute you, dear land of the free.

Green Land of Guyana, our heroes of yore Both bondsmen and free, laid their bones on your shore; This soil so they hallowed, and from them are we, All sons of one mother, Guyana the free.

Great Land of Guyana, diverse though our strains, We are born of their sacrifice, heirs of their pains, And ours is the glory their eyes did not see One land of six peoples, united and free.

Dear Land of Guyana, to you will we give Our homage, our service, each day that we live; God guard you, great Mother, and make us to be More worthy our heritage? land of the free. 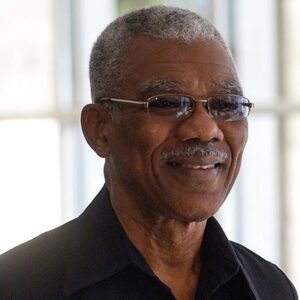 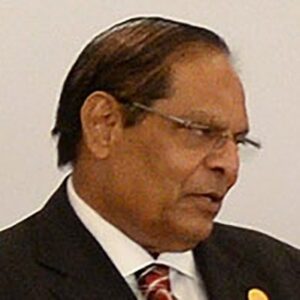 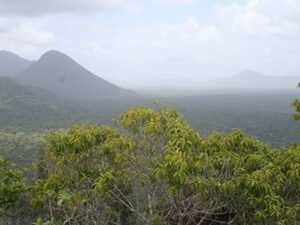 A group of mountains found in Essequibo in south-Western Guyana, the Kanuku Mountains are divided into by channels of the Rupununi River. The name ‘Kanuku’ is in fact an indigenous word from the Wapishana tribe, meaning ‘forest’. This is representative of the wealth of wildlife and vegetation found in the area. The lowland forests sustain 60% of all known bird species in Guyana while 80% of all mammal species found in Guyana live in the Kanuku mountains.

Few people travel deep into the savannah and lowland forest to reach the mountains. For many, the simple but glorious view of the mountains against the backdrop of the Rupunini is more than enough. However, for those that do explore and get up close to the mountains, there is the chance to spot some of the rare animals, such as the harpy eagle, giant otters and pirarucu fish. 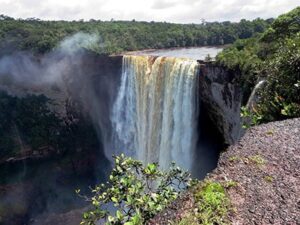 The world’s largest single drop waterfall by the volume of water flowing over it. Just to put this into some context, the Kaieteur Falls is about for times higher than the Niagara Falls. Located on the Potaro River in the Kaieteur National Park, it sits in a section of the Amazon rainforest included in the Potaro-Siparuni region of Guyana. It is 226 metres (741 ft) high when measured from its plunge over a sandstone and conglomerate cliff to the first break. It then flows over a series of steep cascades that cast plumes of tropical mist into the jungle airs all around. A major tourist attraction and rightly so! 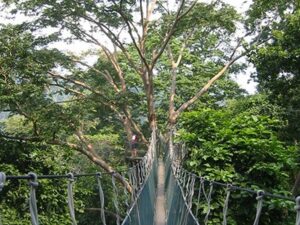 The Iwokrama Forest is nearly 3,710 square kilometres (1,430 sq mi) of central Guyana located in the heart of the Guiana Shield, one of the four last pristine tropical forests in the world. The forest is infamous for its soaring canopies, with some trees reaching as high as 30 metres. The Iwokrama Forest’s ecosystem is located at the juncture of Amazonian and Guianan flora and fauna. As a result, it contains high species richness and several species of animals that are threatened or extinct across most of their former geographic ranges, like the giant anteater. Jaguars, howler monkeys and giant armadillos can all be found in the area. The Iwokrama International Centre aims to preserve and protect the forest and has become an important base for research into ecotourism and conservation. Visitors can take part in activities such as boat trips and guided walks, using rope bridges and mud tracks. Participants are able to learn about the conservation project and the importance of protecting this fragile environment. 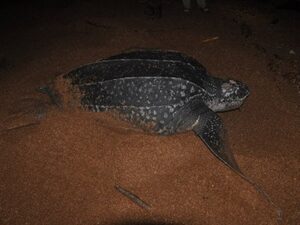 What seems like an endless stretch of unspoiled beach, Shell Beach is undoubtedly the most famous beach in Guyana. Rustic villages and bamboo huts can be see dotted along the lagoons. For most part the beach remains ecologically undamaged. Shell beach is named so because it is made up entirely of seashells, not only perfectly intact seashells but also shells hat have been crushed to the size of sand. However the beauty of the back and bucolic village is not the main reason that people visit. The true drawing point to the beach is that from late March through to August, it becomes the nesting ground for four of eight of the world’ s endangered sea turtles. The different species are a variety of shape and sizes and it is a true wonder to see the sea turtles settle on the shoreline to lay their eggs. 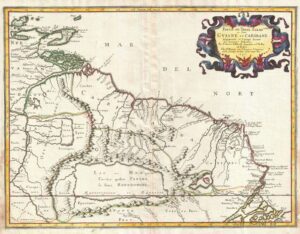 The history of Guyana began before the arrival of Europeans, when the region of present-day Guyana was inhabited by Carib, Arawak, and Warao peoples. Guyana’s first sighting by Europeans was by Alonzo de Ojeda and Amerigo Vespucci in 1499. In 1595, Sir Walter Raleigh explored the area for England. The Dutch began exploring and settling in Guyana in the late sixteenth century, followed by the British. Both began trading with the Amerindian peoples upriver.

The first Dutch settlement was established on the Pomeroon River in 1581. The settlers were evicted by Spaniards and Indians, probably in 1596. Until 1804, there were estates, now forgotten, at Sandy Point and Kierfield, on the seaward side of the present seawall of Georgetown.

Georgetown began as a small town in the eighteenth century. Originally, the capital of the Demerara-Essequibo colony was located on Borselen Island in the Demerara River under the administration of the Dutch. When the British captured the colony in 1781, Lieutenant-Colonel Robert Kingston chose the mouth of the Demerara River for the establishment of a town which was situated between Plantations Werk-en-rust and Vlissengen.

The French captured the colony in 1782 and developed this town, making it their capital city, La Nouvelle Ville. To guard against the dangers of flood and fire, buildings were required to have brick foundations, tiled, separate kitchens, and no thatch was to be used.

At that time, the small town was bordered by two canals, the Croal Street Canal and the Hadfield Street Canal. There was one main dam known as Brickdam.

When the town was taken by the Dutch in 1784, it was renamed Stabroek after Nicolaas Geelvinck (1732—1787), Lord of Stabroek, and President of the Dutch West India Company. The Dutch settlers soon built walls similar to those used in their homeland to keep the Atlantic Ocean out from the north, and divert water coming from the higher ground to the south. Eventually the town expanded and covered the estates of Vlissengen, La Bourgade, and Eve Leary to the North, and La Repentir to the South.

When the British regained control in 1812, it was renamed Georgetown, in honour of King George III. The town began to expand and develop, and Robbstown, Cummingsburg, Kingston, and Werk-en-Rust were added.

The abolition of slavery in 1834 led to black settlement of urban areas and the importation of indentured servants from India to work the sugar plantations.

Under the English administration, the town was controlled by a Board of Police. However, with the abolition of slavery, the powers of the Board of Police proved ineffective and on 1st March 1837, an ordinance established a mayor and town council.

Georgetown gained official city status on 24th August 1842, during the reign of Queen Victoria. In 1848, the British built a railroad, five miles (eight kilometers) long, from Georgetown to Plaisance, which was the first railroad on the South American continent.

In 1928, British Guiana was made a crown colony, a move that reasserted British control at a time when political and labour unrest was rising.

On 23rd February 1945, the Great Fire, as it came to be known, devastated the commercial heart of the capital, and consumed a host of historical and architectural gems which had given the city its character. Most buildings in the business district were rebuilt in reinforced concrete.

Guyana achieved independence from the United Kingdom in 1966, and became a republic on 23rd February 1970, though remaining a member of the Commonwealth. Forbes Burnham (1923-1985) became the first prime minister and nationalized foreign companies that dominated the bauxite and sugar industries. Greater Georgetown came into being on 29th April 1970.

In 1992, Cheddi Jagan (1918–1997) was elected president in what is considered the country’s first free and fair election since independence. After his death five years later, his wife, Janet Jagan (b. 1920), became president but resigned in 1999 due to poor health.