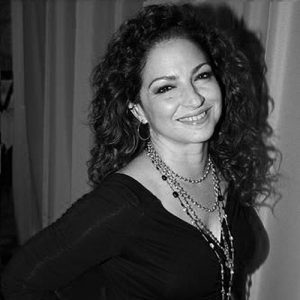 Gloria Estefan is a singer, songwriter, born in Havana, Cuba but raised in Miami. Estefan liked to write poetry as child but soon turned to music in her teen year. As a teenager Gloria Estefan was responsible for nursing her ill father and looking after her younger sister, while her mother worked and went to school, to be able to provide for the family. It was during these times that Gloria used music as a release, she would spend hours in her room playing her guitar.
In 1975, Gloria Estefan met keyboardist Emilio Estefan (who she married 3 years later) and become the lead singer of his band, then called, ‘Miami Latin Boys’. Estefan started off just singing with the band at weekends as she was still attending the University of Miami. However Emilio saw her potential and persuaded her to pursue a musical career. A year and half after Gloria Estefan joined the band, who were now called the ‘Miami Sound Machine’, they released their 1st album. The album was a collection of disco, pop and original ballads sung in Spanish, called ‘Rancer’. Following this, the band gained popularity with one off their disco style songs, written in English. This encouraged the band to write more songs in English and led to the release of their 1st entirely English album. The band had a number of hit singles from this album in 1985, which led to extensive tours, concerts and music videos on MTV and VH1. Miami Sound Machine had become a leading US band.
Gloria Estefan quickly became the main attraction and the band were often promoted as ‘Gloria Estefan and the Miami Sound Machines’ or even just ‘Gloria Estefan’. In March 1990, a tragic accident occurred, whilst the band were on tour. Gloria was left with broken vertebrae in her back. Her diagnosis wasn’t good but to the amazement of many, Estefan made a remarkable recovery. She appeared on TV on the American Music Awards, just under a year later, in January 1991. A few months after this, Gloria Estefan embarked on her year-long tour.

Gloria Estefan is a remarkable woman. She has had a fantastic music career of which she shows no signs of slowing down. In 2007 she released her 29th album overall, 11th studio solo album and 4th Spanish album. The music industry has changed a lot over the years but Estefan has shown that she can adapt and is still relevant. In 2011 she collaborated with the incredible music producer, Pharrell Williams. This just shows the longevity of her music career. She has written children’s novels, wrote a Cuban cookbook with her husband and now owns a chain of Cuban restaurants in South Florida. Gloria Estefan you are a true inspiration. A 7 time Grammy award winner, mother, grandmother, entrepreneur. You showed dedication, resilience and determination, even when the odds were stacked against you. Gloria Estefan, Caribbean 1st absolutely salutes you.