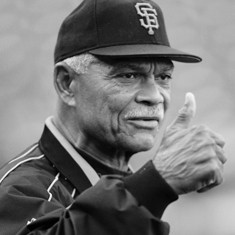 Felipe Alou is a man of humble beginnings. He was born in Haina, Dominican Republic and dreamed of becoming a doctor in order to help his family financially. Alou studied for his qualifications at the University of Santo Domingo and worked with his father as carpenter, all the while his first love was actually baseball.

A natural athlete, Felipe Alou was to represent the country in track and field at the Pan American Games. He already held the national record in Javelin. However, he was switched to the baseball team at the last minute. This revealed his talent in baseball as the Dominican Republic took Gold at the Games, and as they say, ‘the rest was history’.

Felipe Alou’s Major League debut came on the 8th June 1958, aged 23, he was signed and selected to play for the San Francisco Giants (Giants). The Giants became the National League Champions, and Alou was named an All-Star outfielder in 1962, as well as 1966 and 1968. A year later in 1969, Alou was now playing for the Atlanta Braves, and they became the National League Western Division Champions. In 1971, Alou was part of the American League Western Division Champion team with the Oakland Athletics Team. It is important to note that Alou was not only a skilful outfielder but also a first baseman. He dominated the national league in hits twice and runs once. Alou also hit home runs to begin a game on 20 occasions!

Felipe Alou was the first Dominican player to play regularly in the Major Leagues. He is also the most prominent member of one of baseball’s most notable families of the late 20th Century. Alou is the oldest of the trio of baseball playing brothers, Matty and Jesús, who are both primarily outfielders. On 15th September 1963, the brothers made history by becoming the first all brother outfield, whilst playing for the Giants. The trio played together in eight games. Felipe Alou’s son Moisés was also a successful Major League Baseball outfielder. Moisés was actually managed by his father when he played for the Montreal Expos (Expos) from 1992-1996 and the Giants from 2005-2006. All in the family of baseball players have been named All-Stars at least twice (except Jesús).

Felipe Alou had a career spanning 17 years as a baseball player, so it was only natural than when he retired he stayed close to the sport. In 1976, Alou joined the Expos organisation and became the batting coach and minor league manager. On the 22nd May 1992, Alou was promoted from bench coach to field manager, making him the 1st Dominican born manager in Major League history. In 1994, the Expos had the best record in the Major League and Felipe Alou was named National League Manager of the Year. In 2003, Felipe Alou became manager of the Giants, the team where he started his Major League Baseball career. In his first season as manager, the team won 100 games. Alou also managed the team into the playoffs.

Having had an extremely successful playing career and also managing career, Felipe Alou retired after the 2006 season with the Giants. It is safe to say he dedicated a lot of his time to the sport and achieved so much whilst he was a part of it. Many speak of Alou as being a well-respected and loved man whom a lot of people look up to. The Giants named their facility in the Dominican Republic after Alou, ‘The Felipe Alou Baseball Academy’. The facility serves as the headquarters for the Giant’s Latin American operations. It is an educational training centre and a hub for player development, for the team’s international prospects. It is evident that Felipe Alou’s playing, and managerial career has left a lasting legacy. A man adored by so many, Felipe Alou, Caribbean1st absolutely salutes you.