Welcome Dominicans and visitors to what we call ‘The Island Of Tranquility’.

Dominica is the “Nature Isle of the Caribbean” So named because of its unspoiled natural beauty. Dominica boasts a river for every day of the year and the world’s second-largest boiling lake. Truly idyllic, intimate, spiritual. Although small, Dominica is plentiful, especially when it comes to the warmth and hospitality of the people. We recommend Dominica to anyone wanting to ground with nature and seek serenity. 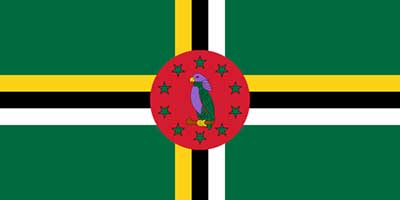 The ten green stars, which are the traditional symbol of hope, represent the ten parishes of Dominica. Each parish has equal status and so the stars also represent the equality of the people.
The Sisserou Parrot which sits in the centre of the flag, is the national bird of Dominica and symbolizes flight towards greater heights and fulfilment of aspirations.
The Parrot also comes from the Dominica Coat of Arms, representing the official seal of the country. The Parrot sits within a red circle which depicts Dominica’s commitment to social justice.
The Dominican flag’s stripes form a cross representing the Trinity of God.
The cross itself demonstrates belief in God. The yellow stripe represents the sunshine and also the main agricultural produce, citrus and Bananas. It is also representative of the first inhabitants of the island, the Carib and Arawak people. The black stripe represents the African heritage a well as the rich black soil of the island. The white stripe symbolises the clarity of the rivers and waterfalls as well as the purity and aspiration of the people.

The green background represents the dense tropical forest and the general lushness of the island. 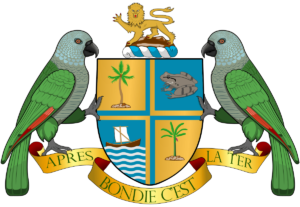 The coat of arms of Dominica was adopted on July 21, 1961. It consists of a shield with two guardian Sisserou parrots bracing the shield atop of which is a raging lion. The shield is divided into four quadrants. There is a canoe under sail gliding upon the Caribbean Sea in the bottom left and a banana tree on the bottom right quadrant.

Below the shield is the national motto: ‘Apres Bondie C’est La Ter’ meaning ‘After God the Earth’. This emphasises the importance of the soil in the island because its economy is based on agriculture.

Isle of beauty, isle of splendour
Isle to all so sweet and fair
All must surely gaze in wonder
At thy gifts so rich and rare.
Rivers, valleys, hills and mountains
All these gifts we do extol.
Healthy land, so like all fountains
Giving cheer that warms the soul.

Dominica, God hath bless thee
With a clime benign and bright
Pastures green and flowers of beauty
Filling all with pure delight,
And a people strong and healthy
Full of godly, reverent fear.
May we ever seek to praise Thee
For these gifts so rich and rare.

Come ye forward, sons and daughters
Of this gem beyond compare.
Strive for honor, sons and daughters,
Do the right, be firm, be fair.
Toil with hearts and hands and voices.
We must prosper!
Sound the call, In which every one rejoices.

“All for Each and Each for All”. 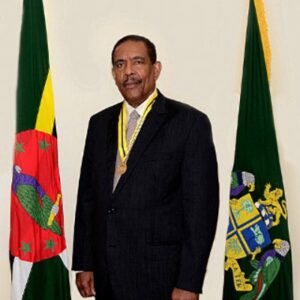 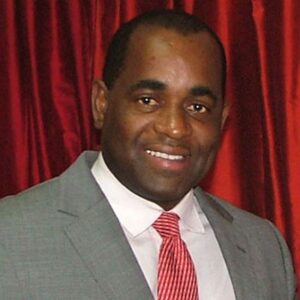 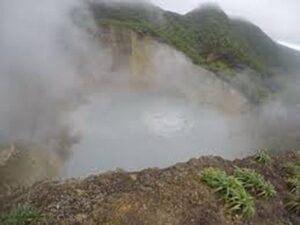 The most famous of Dominica’s trails, the Boiling Lake is a flooded fumarole reached after a hard 3-4 hour hike (one-way) from the village of Laudat. But it’s well worth it – the Lake is a cauldron of bubbling greyish-blue water that is usually enveloped in a cloud of vapour. The lake is known as the world’s second largest boiling lake, at approximately 200 ft (63m) across. 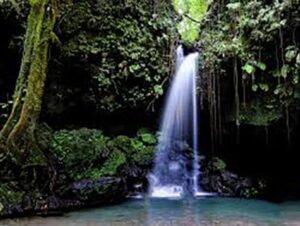 The Emerald Pool is the most visited natural attraction in Dominica’s Morne Trois Piton National Park which is a UNESCO World Heritage Site. This wonderful grotto is a relatively easy 30-minute walk into the rainforest in the centre of the island (on the road to Castle Bruce). Very popular on cruise ship days; take your swimming gear but be warned – it’s a little cold in the pool.

It’s been featured in several movies and has also been used as a place to be married at! 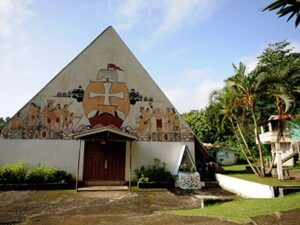 Presently approximately 3,000 Kalinagos live in a collectively owned 3,700 acre territory, spread over eight hamlets, on the north-eastern coast of Dominica. Together, these villages are called the Kalinago Territority. The Kalinago live a simple communal life, carrying on the many traditions of their ancestors.

The Kalinago Territory is an exciting part of Dominica where local residents and visitors can come to expand their understanding of Dominica’s first people. Here we share the rich heritage of the Kalinago people, drawing upon the lifeways of long ago and the traditions, legends, and beliefs that have been kept alive for thousands of years. 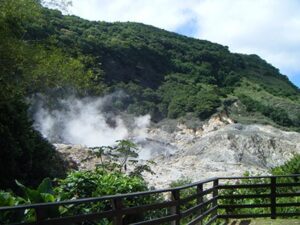 The distinctive and ever-present sulphur fumes have ridden the area of most of the living organisms. In the hills above Soufriere, naturally heated mineralised waters drain from two streams into four stone pools. A short walk away there are three more smaller and nicer pools tucked into the forest. Many visit the Sulphur Springs to take advantage of the healing properties of the Sulphur deposit in the purpose built bathing pools. However, many do not realise that there is also a fantastic trail, the Grand Soufriere Sulphur Spring Trail. 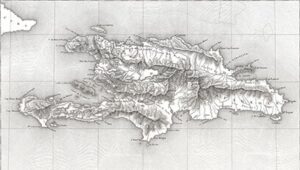 The islands indigenous Arawak people were expelled or exterminated by Caribs in the 14th century. Columbus landed there in November 1493. Spanish ships frequently landed on Dominica during the 16th century, but fierce resistance by the Caribs discouraged Spain’s efforts at settlement.

In 1635, France claimed Dominica. Shortly thereafter, French missionaries became the first European inhabitants of the island. Carib incursions continued, though, and in 1660, the French and British agreed that both Dominica and St. Vincent should be abandoned. Dominica was officially neutral for the next century, but the attraction of its resources remained; rival expeditions of British and French foresters were harvesting timber by the start of the 18th century.

Largely due to Dominica’s position between Martinique and Guadeloupe, France eventually became predominant, and a French settlement was established and grew. As part of the 1763 Treaty of Paris that ended the Seven Years’ War, the island became a British possession. In 1778, during the American Revolutionary War, the French mounted a successful invasion with the active cooperation of the population. The 1783 Treaty of Paris, which ended the war, returned the island to Britain. French invasions in 1795 and 1805 ended in failure.

In 1763, the British established a legislative assembly, representing only the white population. In 1831, reflecting a liberalisation of official British racial attitudes, the Brown Privilege Bill conferred political and social rights on free non-whites. Three Blacks were elected to the legislative assembly the following year. Following the abolition of slavery, in 1838 Dominica became the first and only British Caribbean colony to have a Black-controlled legislature in the 19th century. Most Black legislators were smallholders or merchants who held economic and social views diametrically opposed to the interests of the small, wealthy English planter class. Reacting to a perceived threat, the planters lobbied for more direct British rule.

In 1865, after much agitation and tension, the colonial office replaced the elective assembly with one comprised of one-half elected members and one-half appointed. Planters allied with colonial administrators and outmanoeuvred the elected legislators on numerous occasions. In 1871, Dominica became part of the Leeward Island Federation. The power of the Black population progressively eroded. Crown Colony government was re-established in 1896. All political rights for the vast majority of the population were effectively curtailed. Development aid, offered as compensation for disenfranchisement, proved to have a negligible effect.

Following WWI, an upsurge of political consciousness throughout the Caribbean led to the formation of the Representative Government Association. Marshalling public frustration with the lack of a voice in the governing of Dominica, this group won one-third of the popularly elected seats of the legislative assembly in 1924 and one-half in 1936. Shortly thereafter, Dominica was transferred from the Leeward Island Administration and was governed as part of the Windwards until 1958, when it joined the short-lived West Indies Federation.

After the federation dissolved, Dominica became an associated state of the United Kingdom in 1967 and formally took responsibility for its internal affairs. On November 3, 1978, the Commonwealth of Dominica was granted independence by the United Kingdom.

Independence did little to solve problems stemming from centuries of economic underdevelopment, and in mid-1979, political discontent led to the formation of an interim government. It was replaced after the 1980 elections by a government led by the Dominica Freedom Party under Prime Minister Eugenia Charles, the Caribbean’s first female prime minister. Chronic economic problems were compounded by the severe impact of hurricanes in 1979 and in 1980. By the end of the 1980s, the economy recovered, but weakened again in the 1990s due to a decrease in banana prices. In the 2000s, the economy was hit by a spate of disasters, including the removal of the European preferential trade for bananas, the impact of Hurricane Dean, and the global financial meltdown. Dominica has managed quite well during the current global recession as a smaller percentage of its economy is based on tourism and foreign investment.

In the January 2000 elections, the Edison James United Workers Party (UWP) was defeated by the Dominican Labour Party (DLP), led by Roosevelt P. “Rosie” Douglas. Douglas died after only a few months in office and was replaced by Pierre Charles, who died in office in January 2004. Roosevelt Skerrit, also of the DLP, replaced Charles as Prime Minister. Under Prime Minister Skerrit’s leadership, the DLP won elections in May 2005 and in December 2009. In 2009, the DLP won 18 of the 21 constituencies, with the UWP collecting 3 seats. Currently the opposition has decided to boycott parliament over allegations of campaign improprieties. Due to the absence in parliament of 2 UWP members, the government held by-elections on July 9, 2010 with both seats won by the UWP.