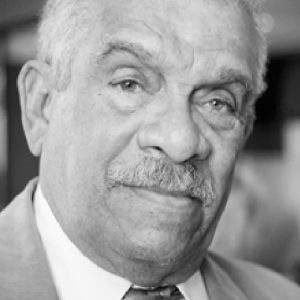 Derek Walcott, born in Castries St. Lucia, came from a family that had a love and appreciation for the arts. Walcott initially trained as a painter but soon discovered his passion and talent for poetry. Aged 14, he published his first poem in the local newspaper. Just 5 years later, he had printed two collections of his poems. He borrowed the money from his mother to do so and made the money back distributing his books on street corners and selling them to friends.

Having studied at the University of the West Indies in Kingston, Jamaica, Walcott then moved to Trinidad in 1953. There he became a critic, teacher and journalist.

Walcott’s major breakthrough came in 1962 with a collection of poems called, ‘In a Green Night: Poems 1948-1960’. This collection along with many of Derek Walcott’s poems celebrated the Caribbean and its history.

In 1990, Derek Walcott published one of his greatest pieces, ‘Omeros’. This piece was an effort to touch every aspect of the Caribbean experience. It secured him an international reputation.

Not only has Walcott had an extremely successful career as a poet but also a playwright. In 1950, he cofounded the Trinidad Theatre Workshop alongside his twin brother. In 1971, he won the Obie Award for his play, ‘Dream on Monkey Mountain.’ Which describes a West Indian’s quest to claim his identity and heritage. Ten years later he founded the Boston Playwrights’ Theatre.

Derek Walcott has had a long and distinguished career. He has written almost 30 plays. He has also taught at schools in St. Lucia and Grenada as well as Universities across America and England. Walcott has won a whole host of awards including the Queens Medal for Poetry in 1988 and the Royal Society of Literature Award. In 1992, Walcott became the first Caribbean to receive the Nobel Prize in Literature. He is also an honorary member of the American Academy Institute of Arts and Letters. Walcott’s works explore the Caribbean cultural experience and he sometimes shifted between Caribbean patois and English. Derek Walcott an elated, enthusiastic poet and playwright, who was madly in love with English, Caribbean1st absolutely salutes you.