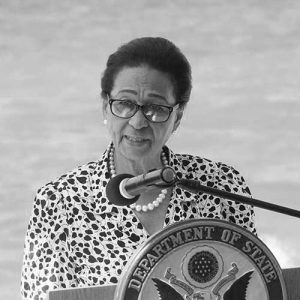 Dame Marguerite Pindling was born in Long Bay Cays, Andros in 1932 and is one of eleven children. She moved to Naussau, to live with her sister, in the 40s and attended the Western Senior School. Pindling’s first job was as an assistant to the noted photographer, Stanley Toogood. Pindling later worked for Colyn Rees where she met the love of her life Lynden Pindling, a lawyer working next door. They married shortly after on 5th May 1956.

Lynden Pindling became the Premier of the Bahamas in 1967 and then the country’s first Prime Minister in 1992. Lynden Pindling earned the nickname ‘Father of the Nation’. Dame Marguerite stood by her husband during his vigorous election campaigns. She offered her unconditional support, energy and determination until his untimely death in 2000.

Dame Marguerite was a lot more than just a committed wife of 44 years to Lynden Pindling. Dame Marguerite Pindling continued on the path that was instilled into her by her husband. She served as Deputy to Sir Arthur while he was abroad and was sworn in as 10th Governor-General of the Commonwealth of the Bahamas on July 8th 2014, aged 82. She is the 9th Bahamian to hold office and she succeeds Sir Arthur Faulkes.

Alongside Dame Marguerite political campaigns, she was also the driver behind the unprecedented success of the Bahamas Red Cross, where she held the position of chair of fundraising. Dame Marguerite was also an advocate for children with disabilities. She fundraised for many charities helping whose aim was to help such children. Dame Marguerite Pindling famously stated that, ‘No longer shall it be said: “a woman’s place is in the home”…it will be her choice as to where she displays her god given talents!’ What strong, powerful and inspiring words.