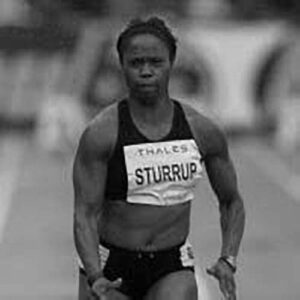 The Bahamas athlete, who made her Olympic debut at the Atlanta Games in 1996, winning the silver medal as part of the 4x100m relay team. Sturrup is the Bahamian record holder for the women’s 100m with a personal best of 10.84, set in 2005. Chandra Sturrup then became a 5 time Olympian, 8 time IAAF World Indoor and Outdoor medallist and 3-time Hall of Fame recipient.

Sturrup was also a class performer in the long jump and went on to become a Two-Time Olympic medallist in the Sprint Relay. She also gained many Regional and International Medals.

In 2000, Sturrup competed in the 4x100m women’s relay in the Sydney Olympic Games. This event was one of the most memorable events in Bahamian sports history. The rivalry that had built up between the Bahamian team and the US team was immense. Hundreds of Bahamians stayed up to watch the final, and of course the ladies did not disappoint. The team came away with the Gold medal and became known as the ‘Golden Girls’. It was the Bahamas 2nd ever Olympic gold medal in a track and field event. Sturrup later went on to describe this moment as her most proud.

Aged 40 Chandra Sturrup was selected to represent her country in the London Olympic Games in 2012. While she was disappointed that she didn’t qualify to the run the 100m, she saw it as a tremendous opportunity. Sturrup felt proud and honoured to be running with some of the upcoming athletes, who looked up to her.

41-year-old Sturrup announced her retirement at the National Open Track and Field Championship in Freeport, Grand Bahama. However, she continued to pass on her knowledge and went on to become the Sprint Coach at Wakefield High School from 2008 – 2013. Alongside her track career, Chandra Sturrup was working to complete her Degree in Interior Design. Having retired she honed in on her new love and plans to pursue a career in this field.

Chandra Sturrup is a true inspiration, who represented her country to the full. Her consistency and drive to excel is honourable. As an athlete Sturrup went through many ‘setbacks’ due to injury and often not being selected. She never let this hold her back and decided to bow out of the sport on her own terms, in her own timing. Chandra Sturrup we wish you all the best as you embark on your new journey and look forward to see what success this chapter in your life will bring. Chandra Sturrup, one of the most accomplished athletes in the history of Bahamas, Caribbean 1st absolutely salutes you.