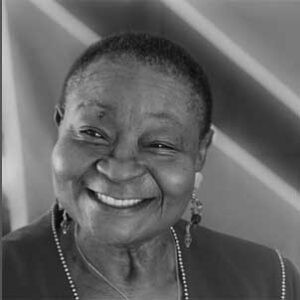 Rose McCartha Linda Sandy Lewis, popularly known as Calypso Rose was born in Bethel, a small village on the beautiful island of Tobago. Rose always had a love for music and knew that performing was what she wanted to do. She started writing Calypso songs aged 13. By the time she was 15 she was performing under the name Crusoe Kid. Her 1st minor hit was ‘Glass Thief’. It was written after she saw a man stealing glasses from a woman in the market. It was the first Calypso song denouncing inequality between the sexes. This was to be a common theme for many of Rose’s songs in years to come.

In 1966, Rose wrote the iconic anthem, ‘Fire in Me Wire’. This went on to be the first ever Calypso song sung for 2 years at the Trinidad and Tobago Carnival. The song was also translated into 8 different languages.

Calypso Rose continued to perfect her craft and by the 70s she had already toured with Bob Marley and the Wailers three times. Bob Marley was also one of her mentors.

In 1970, Rose wrote her first Soca song, ‘Action is tight.’ From 1972-1978, Calypso Rose reigned as the ‘Calypso Queen’ for five years in a row. Rose’s success continued. In 1977 she became the first woman to win the prestigious ‘Roadmarch’ competition in Trinidad & Tobago, with her song ‘Gimme More Tempo.’ Due to Rose wining the ‘Calypso King’ competition so many times, it was renamed ‘Calypso Monarch’, when she won again in 1978. Calypso Rose’s career continued to flourish and she won numerous awards and titles along the way.

Rose made a comeback in 2015, when she was discovered by Manu Chao. He helped her to produce her new album on which he features on 3 songs. A year later, Rose released her album, ‘Far From Home’ which was extremely well received. This album did especially well in Europe. As a result, on 10th February 2017, Rose won ‘Best Album in the World’, at the Victories de la Musique (French Grammy’s). The breakaway hit from this album ‘Leave Me Alone,’ was extremely popular at the Trinidad and Tobago Carnival and subseuently made its way around the Soca scene all over the world. The songs message again was about women being able to enjoy themselves at a party without being harassed by men. Rose has always believed it is a women’s right to be able to let loose and party, free from the leering gazes and pawing hands of men. However, this song is more than just a Soca anthem. It is all about female empowerment. The song spawned a grassroots activist #LeaveSheAlone campaign, speaking out against violence toward women in the Caribbean and beyond.

As Rose aged, she connected more and more with her African heritage. In 1986, she received the title of Ambassador at Large of Liberia for her efforts to support the improvement of life in the West African nation.  She also won the most outstanding woman award by the National Action Committee for Women in Trinidad and Tobago. Rose won a series of lifetime achievement awards in the 90s, including the International award for Caribbean Music in 1999. As of 2011, Rose was the most decorated Calypsonian in Trinidad’s history. She received the Trinidad and Tobago Gold Humming Bird Medal, for her loyal and devoted service to the nation.

Calypso Rose has shared the stage with many other musical legends, including, Miriam Makeba, Michel Jackson and Roberta Flack. She has headlined at major events and festivals around the world, including America, Europe and Australia. Rose was also the focus of several documentaries, including ‘Lioness of the Jungle’, which was a full-length feature.

Even now in her 70s, Rose maintains her energy on stage. Off stage she may seem frail, she has survived cancer and a series of heart attacks. However as soon as she hits the stage it is a different story. It was not an easy journey for Rose. She came from a very traditional family who were opposed to her singing in Carnival tents. She also had to contend with being a female in what was a very much male dominated industry. However, through hard work and perseverance, her obvious talent could not be denied. Rose was able to gain the respect of many of her fellow Calypsonians and is now known as the Calypso Queen. She made it her mission to fight for everyone, regardless of sex. Her lyrical subtlety and humour within her songs, mixed with a Calypso beat makes them perfect for dancing but also storytelling.

Calypso Rose has had a career spanning more than 60 years and still manages to remain relevant now. A truly determined and iconic cultural figure. One of the greatest Calypso singers ever and the premier ambassador of Caribbean music, with an unstoppable stage persona. Calypso Rose, Caribbean1st absolutely salutes you.