“Each Endeavouring, All Achieving"

Welcome to you Antiguans and all other visitors to Antigua. Caribbean1st calls Antigua our ‘Obscure’ Island. If you’ve not visited Antigua before, on first sight it may not appear the most picturesque of the islands, but move inwards and you begin to recognize an intrinsic, deeper beauty.

The mellow nature of Antiguans encourages a feeling of peace, well-being and a sense of belonging, not feelings we would normally associate with visiting new territories? Beauty really does come from within…? Antigua is the ‘gateway to the Caribbean’ as many pass through it on the way to another island, so next time your passing through

pause for a moment and take a look...Enjoy! 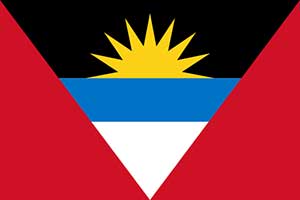 In the Antigua and Barbuda flag the star/sun combination represents the dawning of a new era of self-government. The flag was adopted when the islands became a self-governing nation, under British control. 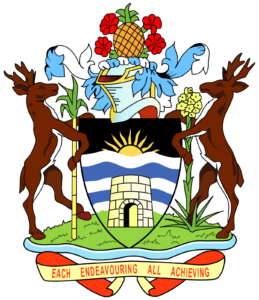 The Pineapple On the top of the Heraldic helmet represents the famous sweet Antigua Black Pineapple.
The Red Hibiscus Flowers represent the many types of plants found in Antigua.
The sugar mill & sugar cane (left of shield) represent the historical sugar cane industry which once was Antigua’s main industry.
The Shield With the sun and wavy white & blue bands symbolise the beautiful sun, sea and beaches of Antigua.
The yucca plant (right of shield with flowers) was once the old emblem of Antigua.
The deer represent the pre-colonial wildlife that inhabited Antigua.
The scroll at the bottom of the Coat of Arms reads with Antigua’s National Motto: “Each Endeavouring, All Achieving”

Designed by Gordon Christopher with some modifications by the Statehood Celebrations Committee in 1966.

NATIONAL ANTHEM
Fair Antigua and Barbuda We thy sons and daughters stand, Strong and firm in peace or danger To safe guard our native land. We commit ourselves to building A true nation brave and free. Ever striving ever seeking Dwell in love and unity. Raise the standard! Raise it boldly! Answer now to duty’s call To the service of thy country, Sparing nothing, giving all; Gird your loins and join the battle ‘Gainst fear, hate and poverty, Each endeavouring, all achieving, Live in peace where man is free. God of nations, let Thy blessings Fall upon this land of ours; Rain and sunshine ever sending, Fill her fields with crops and flowers; We her children do implore Thee, Give us strength, faith, loyalty, Never failing, all enduring To defend her liberty.
FIGUREHEADS 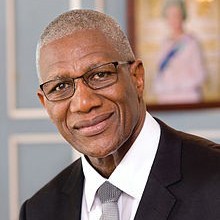 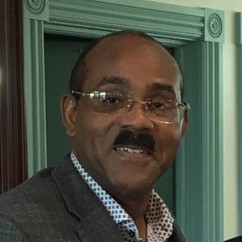 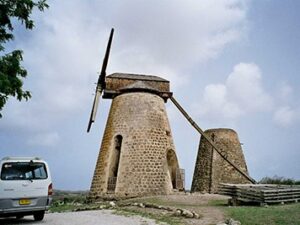 Betty’s Hope is located in the limestone district of Antigua’s tranquil rural area, with beautiful vistas over the rolling landscapeto the distant ocean. The founder of Betty’s Hope was Governor Keynell, whose widow inherited the estates upon his death in 1663, but had to flee Antigua during the French occupation in 1666. When Antigua was reoccupied by the British, Parliament annulled all land claims prior to the French occupation, (of those who had fled or been disloyal to the Crown). Instead, in 1674, Betty’s Hope was granted to the Codrington family, then residing in Barbados.

Today an active restoration of Betty’s Hope is under way. New sails have been installed on the mill and the crushing machinery has been restored to working condition. The next phase of restoration involves repairing the cistern complex and the planting of trees and crops of former times.

A visitor centre has been created by converting a former cotton house storeroom into a museum. This includes various aspects of the plantation’s history and shows early estate plans, pictures and maps, artefacts and a model of the central site. 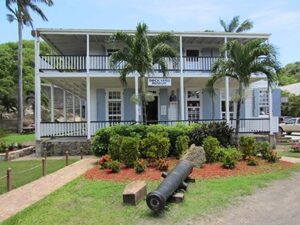 English Harbour has been the haunt of many famous naval officers including Rodney, Nelson, Collingwood, Prince William Henry, Hood, andCochrane. Today the Dockyard at English Harbour is named after the victor of the battle of Trafalgar, Admiral Lord Nelson. Nelson was based at English Harbour from 1784 to 1787. He was Senior Captain at 27 years of age and became temporary Commander-in-Chief of the Leeward Islands for a short time.

Today you can visit Nelson’s Dockyard where many of the restored buildings house modern facilities that still reflect the naval heritage of English Harbour. Private yachts now replace Naval vessels in the harbour, but English Harbour remains a favourite port for those making the long Atlantic crossing. 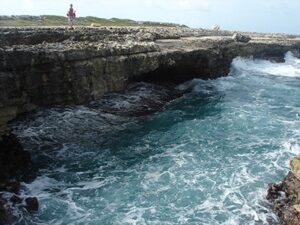 At the north-eastern point of Antigua there is a remote wild area known as Indian Town Point. The area waslegally constituted as a National Park in the 1950’s. Within the park there is a remarkable example of sea-water erosion. Devil’s Bridge is a natural arch carved by the sea from soft and hard limestone ledges of the Antigua formation, a geological division of the flat north-eastern part of Antigua. A bridge was created when a soft part of the limestone eroded away by action of Atlantic breakers over countless centuries. 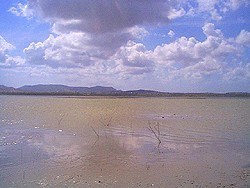 This expanse of freshwater is reputed to be largest in the Eastern Caribbean. It is about amile long and half a mile wide, when full. It covers an area of about 320 acres and holds 1 billion gallons of water. This water is held by two dams; the largest is the Potworks dam at the eastern end and the Delaps dam is to the south.

The Potworks dam was planned in the late 1960’s. While work was underway in 1968, only 24 inches of rain fell during the entire year; Antigua’s average rainfall is 44 inches a year. Scarcely had the dam been finished when great rains filled the reservoir to capacity. Potworks dam and its reservoir were officially opened on 28th May 1970, and there is a small monument on the west of the dam commemorating this event. Potworks served well in 1974, when there was little or no rainfall from January to mid-August. In September 1984, 5.58 inches fell to end a drought. Potworks dam caught 20 million gallons of water.

The importance of Sir Christopher Codrington’s arrival on the islands cannot be underestimated. In 1684 Codrington came to Antigua seeking an island that could support large-scale sugar cultivation, much like what was already undergo elsewhere in the Caribbean. Over the next fifty years sugar cultivation on Antigua catapulted and by the mid 1800s there were more than 150 cane-processing windmills. Each windmill also had a sizeable plantation. The majority of these picturesque stone buildings still remain, however many have been converted to houses, bars, restaurants and shops. Betty’s Hope, one of Codrington’s original sugar estates, is a fully restored sugar mill open to the public.

Antigua’s history of habitation stretches as far back as two and a half millennia before Christ. The first settlements, dating from about 2400 B.C., were those of the Siboney. Siboney is an Arawak word meaning ‘stone-people’. The Siboney were traveller Meso-Indians whose beautifully crafted shell and stone tools have been found at dozens of sites around the island. Long after the Siboney had moved on, Antigua was settled by the pastoral, agricultural Arawaks. They were then displaced by the Caribs–an aggressive people who ranged all over the Caribbean.

The earliest European contact with the island was made by Christopher Columbus during his second Caribbean voyage in 1493. Columbus sighted the island in passing and named it after Santa Maria la Antigua, the miracle-working saint of Seville. European settlement, however, didn’t occur for over a century. This was mainly because of Antigua’s lack of fresh water and abundance of determined Carib resistance. Eventually, in 1632, a group of Englishmen from St. Kitts established a successful settlement, and in 1684, with Codrington’s arrival, the island entered the sugar era.

In 1685, the Codrington family leased Barbuda from the king for 185 years from 1685 -1870. Barbuda was used a breeding ground for slaves. At one point in the genius world of records, we had the tallest people in the world on an average height. Barbuda is also known for its rich marine life, a fact attributed to the coral reef surrounding the island. Many cargo ships met their demise from these reefs within less than half a mile of the island. Codrington became the country’s most prominent family, hence the name of its capital.

By the end of the eighteenth-century Antigua had become an important strategic port as well as a valuable commercial colony. Known as the ‘gateway to the Caribbean,’it was situated in a position that offered control over the major sailing routes to and from the region’s rich island colonies. Most of the island’s historical sites, from its many ruined fortifications to the impeccably-restored architecture of English Harbourtown, are reminders of colonial efforts to ensure its safety from invasion.

Horatio Nelson arrived in 1784 at the head of the Squadron of the Leeward Islands to develop the British naval facilities at English Harbour and to enforce strict commercial shipping laws. Nelson spent almost all of his time in the cramped quarters of his ship, declaring the island to be a “vile place” and a “dreadful hole.” Serving under Nelson at the time was the future King William IV, for whom the altogether more pleasant accommodation of Clarence House was built.

It was during William’s reign, in 1834, that Britain abolished slavery in the empire. Antigua was the only island within the British colony to be granted immediate full emancipation rather than a four-year waiting period. Today, Antigua’s Carnival festivities commemorate the earliest abolition of slavery in the British Caribbean.

Emancipation improved the island’s economy, but the sugar industry of the British islands was already beginning to wane. Until the development of tourism in the past few decades, Antiguans struggled for prosperity. The rise of a strong labour movement in the 1940s, under the leadership of V.C. Bird, started the push towards independence. In 1967, with Barbuda and the tiny island of Redonda as dependencies, Antigua became an associated state of the Commonwealth. On 1st November 1981 it achieved full independent status.